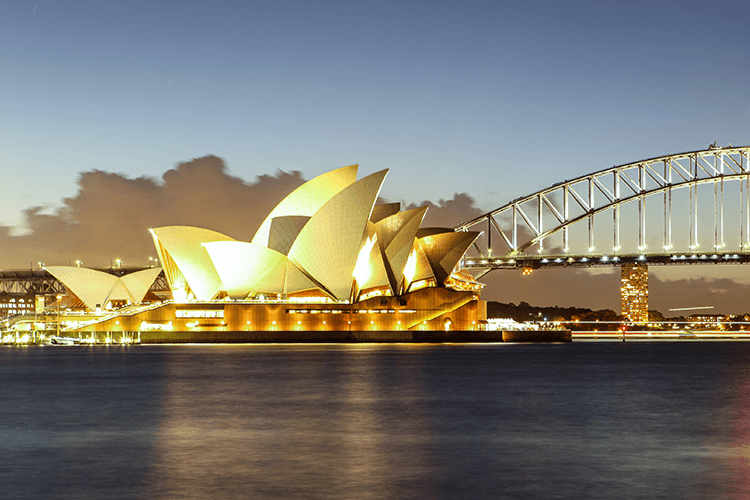 Australia is a country and a continent that is located between the Indian and the Pacific Ocean, it is the biggest island in the world and the sixth biggest country in the world in land area, Australia is known for its natural landscapes, coastal overseas and red desert, beautiful beaches, friendly people and relaxed atmosphere.  It is the only nation that governs the entire region. Its major cities Sydney, Brisbane, Melbourne, Canberra, Adelaide, Hobart Darwin, and Perth, it contains a population of 23.6 million according to 2017 and approximately 390,000 people located in the capital of Australia Canberra. Even though Australia has no official language, English language is spoken by 73% people and it has more than 26o other spoken languages, it’s also one of the Top 10 countries to migrate to in 2018.

The country has a wide variety of climate due to its large geographic area; the northern states of Australia are typically warm all the time, with the southern states experiencing cool winter but rarely zero temperature.

Australia is a multicultural place and this is a reflection of the county’s food, lifestyle, cultural practice and experience. It has 19 listed world heritage properties, and it is famous for its landmark bridges including Sydney Harbor Bridge.

The economy in Australia is the world’s 12th largest economy in the world and the top performing nation on every measure of excellence, and it’s ranked among the strongest of advanced economies in the organization for economic cooperation and development. And low unemployment, low inflation, and a highly skilled workforce. Over the past 50 years, Australia has developed a highly diversified economy that depends on agriculture sectors and manufacturing, services and energy producers, the economic growth driven by the private sectors and supported by trade liberalization.

Australia formal students participate in formal school education from the age of five to the age of 18, the country vocational education and training system provides students with the skills required in the modern labor market, also international students are attracted to Australia for its high standard of teaching, and internationally acceptance for qualifications; Australia has more than one thousand training colleges, English language institutes, and schools, it’s the largest service export, Australia also has one of the top universities in the world ranked in the Times Higher Education World University for being the top 100 hundred higher education, and Australia two largest cities Melbourne and Sydney was ranked by global consultancy firm for the most popular cities in the world for international students.

Healthcare system in Australia is a world class of effectiveness and efficiency, Australia is ranked in the top of world health organizations in the world, by providing a free health care in public hospitals, Medicare ensure that all Australians have an access to a high-quality health service with a bit cost or no cost at all.

One of the major cities in Australia is New South Wales it is the oldest and the largest and the most multicultural state, it contains a population of 7.955.900 with over than 200 different languages spoken in the state, the capital city of New South Wales in Sydney and it’s the Asia-pacific cultural hub and the major global city.

New South Wales is the largest state economy and home to 45% of the top enterprises in Australia, it’s a regional economic powerhouse of the most stable regularity and political in the world, and has a large agriculture, strong manufacturing, service sectors, and energy,  and as for Sydney it’s a key financial hub for the Asia Pacific region. Business investors make an important and significant contribution to the economy of Sydney and New South Wales.

NSW and Sydney are famous for its warm climate, as the average maximum temperature range from 26c in summer and 16c in winter, as the sun shines more than 340 days a year on average.

Sydney has the best quality of living standards, as Chinese community has an important part of the city character, the city is home to the largest Chinese population in the area, and the most common non-English language in the area is Chinese with nearly 5% of New South Wales population.

NSW has one of the oldest universities in Australia the University of Sydney and one of the top 100 in the world, and one of the friendliest cultures in Australia, and Sydney has vibrant arts and cultural sense with many musical  and performance venues, art galleries and museums, and that’s what makes the City artistic.

Western Australia is the largest Australian State, it is bounded by the Indian ocean of the north and west of the southern ocean to the south, with a population of 2.69 million people, its Capital is Perth closer to Singapore and Jakarta, English is the main spoken language in it and there are significant communities of Scottish, Irish and Italian.

The state has a variety of climatic conditions, monthly temperature range in the summer from 17c in July and 30c in February as for winter the minimum temperature falls below 5c.

Western Australia depends on Agriculture as one of the main primary industries as an extensive grain and sheep farming as one of the major products are beef, lamb, wheat are its main products, it also provides the raw materials that include fine leather, noodles, and ice cream, and they also have a well-managed forestry industry produce hardwood and softwood from natural forests and plantation.

Another major economic industry is the energy resources since the state focuses on natural gas and supplies it to Japan, Western Australia is also a leading supplier of Diamond, iron, zircon and more. Manufacturing is also one of the main reasons for the economic growth of the state as the shipbuilding industry has built more than 60% of the national civil craft. Recent major investment has established facilities for producing electronic equipment, chemicals, and pharmaceutical.

Western Australia contains public and private schools systems that cater for more than 500,000 students each year, and about the higher education, it also contains five universities, private vocational colleges, in addition of formal courses, post-secondary and institutions that provide management and workforce training to meet the needs of individual employers or industry organizations.

Western Australia is known for the artistic part of it, there is an annual Perth festival that attracts contributions in drama, music, films and motion graphics.

Queensland is located in the northeast of Australia continent; it is the second largest State in Australia, with a population of 4.691 million people, the capital of the state is Brisbane.  Queensland has five of the Australian world natural heritage, and it’s well-known for its beautiful beaches, tropical islands, and rainforests.

The climate of the Queensland as summer temperatures are high, in January it reaches 28c, winters are mild and sunny with a temperature of 20c in July from the south and 26c in the north.

Queensland economy depends on agriculture, power resources, manufacturing, services, and tourism. Agriculture is accounted for 3.5% of the state’s economy employed 63,000 people, it’s also has a gas industry, and a wide variety of minerals are produced in Queensland such as gold, silver, zinc and more.

The state offers a free public education with a required attendance between ages 6 and 15 and also preparatory education is also offered by the state for the age of 4 and 5, institutions of higher education in Queensland are funded by the federal government of Australia, Queensland has 4 universities, and has one private university.

Is a state in southern part of Australia, contains a population of 1.677 million people, the capital of the South Australia is Adelaide, it has a coastlines it’s the Australia art capital as it has plenty of festivals, galleries, design, theatre and architecture, South Australia contains a verity of nature, it has beautiful mountains, offshore islands and rivers there is also national parks and world heritage listed areas to explore the outdoor adventure of South Australia.

South Australia is the driest of the Australian states, the summer average temperature ranges from 29c in January and the average winter temperature is 15c in July.

The economy of South Australia depends on Agriculture, manufacturing, services and power resources, the Agriculture sector has an intensive production of fruits and vegetables and grapes, and it has one of the largest wood-processing industries. South Australia is the country’s leading state in terms of renewable energy production.

Victoria is a state of southeastern Australia, and the second smallest state, covering 227,600 square kilometers, with a population of 378,170 people. The capital of Victoria is Melbourne; the state has diverse regions and attractions that contain national parks, lakes, mountains, rainforests, and beaches.

The north side of Victoria is warmer and much drier than the south, though it is a small country it has a climate the varies across the state. The climate is hot in the summer between Decembers to February, mild in autumn from March to May and cold in winter from June to August and cool in spring.

Victoria economy is the twelfth largest economy in the world it depends on Agriculture, resource and power, manufacturing, tourism and services, Victoria is the largest supplier of food and fiber products in Australia, the state is also popular for its natural gas fields.

Is an isolated island state off Australia’s south cost and it is the 26th largest island in the world, the state has a population of 520,830 (2018). Tasmania is widely known for having the cleanest air in the world, the best scenery and the richest history compared to other states in Australia.  It is known for its beautiful landscapes its vast, rugged wilderness areas, largely protected within parks and reserves, warm people, and its delicious food.

The average maximum daily summer temperatures are between 17c and 23c and winter daily temperatures sit between 3c and 11c degrees.

The tourism sector continues to be a very significant contributor to the Tasmanian economy, with record levels of visitor numbers and spending. This is stimulating investment in tourism accommodation and supporting employment across the State, Other industries enjoying strong growth such as the agriculture industry, fishing, transportation and telecommunication.

School attendance is compulsory for children between the ages of 5 and 16. Government-supported schools include infant, primary (some with preschool facilities), area, district, and high schools (nonselective, comprehensive, mostly coeducational), together with matriculation colleges (secondary institutions that prepare students in their final two years) and special schools.

Australia has many reasons for foreign investors to open their own business there or to obtain an existing one because it has a strong diverse economy that adds more opportunities and has a quality of research institutes and commitment making it a proven destination for bringing new ideas to life, and Australia has a multicultural workforce that is among the most educated in the world.

The country has a high skilled workforce, healthy economy, trusted legal system and friendly and stable society, makes the country an attractive place for foreigners investors, there are a large number of companies that are registered in Australia, and this has been making the companies to become essential parts of the regional and global supply chain.

Australia welcomes millions of visitors each year, anyone who is not an Australian citizen will need a valid visa to enter and to spend time in the country; there are different visas for family, skilled immigrants, business people, and students.

There is a visa available for businessmen who are looking for establishing a business or having an existing one by Australian business investment and investor stream that visa is temporary for business skills visa that is valid for period of 4 years and allows the eligible visa holders to apply for permanent residence if the requirements of their provisional visa for at least two years is fulfilled.